The 25th Canarian Jazz Festival came to an end on 24th July, stretching over more than 2 weeks, entertaining thousands throughout the archipelago, bringing jazz, in its widest sense, to the masses. 25 years! I vaguely remember its early humble beginnings and I couldn't believe that it's been around for two and a half decades already.

The Jazz Festival overlaps with the 20th edition of the month-long TEMUDAS, which again, brings various art forms onto the streets of Las Palmas. The TE stands for teatro (theatre), the MU for música (music) and the DAS for danza (dance). TEMUDAS can also be seen as a play on words; te mudas means you move, and the festival basically moves from street to street, square to square, over the Vegueta district.

It's heartening to see the growth of important cultural and sporting events in the Canaries over the years, attempting to show the world that this archipelago has more to offer than just "cheap" beach holidays. Its Music Festival is held every winter, the next edition being the 33rd. Yes, the 33rd!

The 16th Film Festival was held last March and the Opera Festival will be entering its 50th edition in 2017.
Then, on the sporting front, there's the Marathon, the Transgrancanaria ultra trail, the Iron Man, etc.

Anyway, the purpose of this post wasn't really to talk about these events but rather to share a few photos I took and to expose this gem, hidden behind Triana.

One of my favourite buildings in Las Palmas (and it's many other people's fave too) is El Palacete Rodríguez Quegles. A gorgeous building such as this has to have a gorgeous story to go with it, and this one certainly has.

There was this señor, affluent and influential, no doubt, named Juan Rodríguez Quegles. He fell in love with a lady, María Teresa González Díaz. So, his proposal to her was no beating about the bush: "If you marry me, I'll build you the most beautiful house on this island".

An offer she found difficult to refuse so she took him up on it. And he wasn't lying.

He contracted a prominent architect from Madrid, Mariano Belmás to fulfil his promise. Building work started in 1900. The story then becomes a bit hazy. It isn't clear how much work Belmás did but he didn't finish the work; it was Fernando Navarro y Navarro who did but exactly when the building was completed is unknown.

Through the years, however, love alone wasn't enough to maintain a building of this stature. The cost was too great and its inheritors couldn't keep it going. The Ayuntamiento of Las Palmas acquired it in 1972.

The Conservatorio Superior de Música used the building for about 16 years but eventually found that the premises were too big for the number of students they had.

Since then, several organizations have had the fortune to use El Palacete (Little Palace) and fairly recently, it received a facelift, and took on a fresh coat of paint. The original colour of the exterior walls is unknown although it had been green for many years. Now, it's blue, and against the blue skies of Las Palmas, I think it's perfect. The evergreen flame trees with its bright red flowers provide a graceful contrast.

From 28th May to 24th July, the organization occupying this mansion had been Heineken, who called it The House, and they used it to hold various cultural activities where access to them was by invitation only.

Their penultimate event before their tenure expired was a short concert as part of the 25th Canarian Jazz Festival mentioned right at the beginning of this post. The performing band was Patax. Led by master percussionist Jorge Pérez, they play a blend of jazz fused with funk, Afrocuban, flamenco, folk and whatever else that takes their fancy. If you've never heard of them, I'd recommend that you looked them up.

I was thrilled when I managed to conjure up a couple of last-minute invites and dragged Matthew Hirtes, also known as Mr Gran Canaria Local, along with me. On the early evening of Friday 22nd July, a stripped-down quartet, comprising of Jorge Pérez, Alana Sinkëy, Carlos Sánchez and Daniel García, treated us to an "unplugged" version of Patax. A fuller band would appear later that night at Plaza Santa Ana.


Once in a while, I come up with a photograph (of mine) that I really like. This doesn't happen often but when it does, I like to share it with the world. Of course, not everyone may agree with me. When I mentioned at the beginning that the purpose of this post was to share some photos, the following are what I was referring to. The gentle, demure, sultry Alana Sinkëy simply lit up my camera. Even though I had to crop a lot to get what I had in mind, I am chuffed to have had the opportunity to capture these few seconds of her: 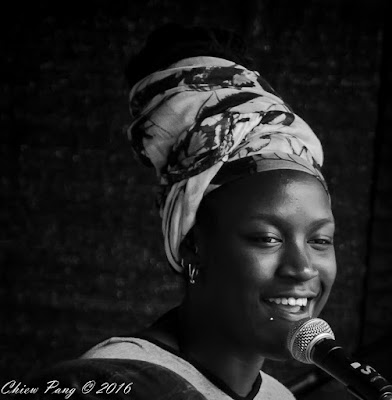 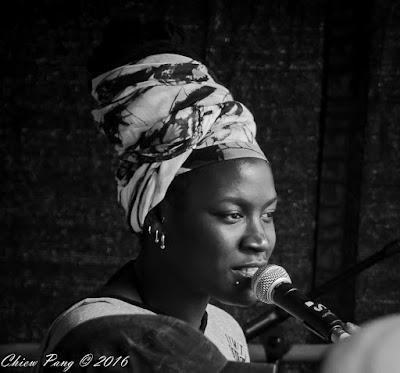 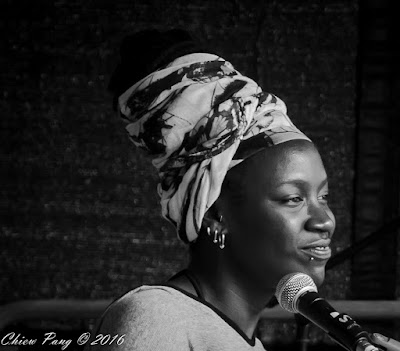 I hope you like them as much as I do!

Villegas, Vicente. "EL PALACETE RODRÍGUEZ QUEGLES." ULPGC, 2012. Web.
Also thanks to Matthew Hirtes for his assistance in the research.